Robert Pattinson and Kristen Stewart are officially parents -- we'll tell you all about the third member of their brood right now on ClevverTV!

Welcome back to you favorite entertainment news source, ClevverTV. I'm your girl Joslyn Davis with new deets on Robsten's growing family. As I'm sure die-hard Kristen Stewart fans are already aware, she a super cute doggie named Bear that she's been spotted around town with. And now we've learned that Robert Pattinson is admitting that they adopted Bear together. R-Pattz told a German newspaper that the twosome rescued the cute pup while they were shooting Breaking Dawn. In Rob's own words: "Thank God that Kristen was with me. So we just adopted one dog. A mutt. We called him Bear." How cute is that? It appears as though this duo is a bit more serious than some thought -- adopting a dog together is sure sign of a very solid couple, and we absolutely love that they chose to adopt and rescue a pup from a shelter! So cool! What do you guys think about this cute little family? Let us know by hitting the comments section and keep it here at ClevverTV by subbing our channel on YouTube. I'm Joslyn Davis, we'll see you guys next time! 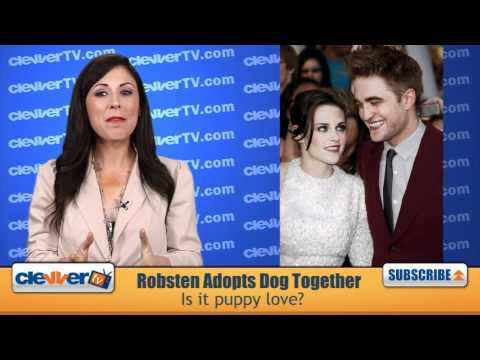